Renee King-Sonnen, Former Cattle Rancher and Founder of Rowdy Girl Sanctuary & the Rancher Advocacy Program Speaks Out for the Cows and about the Controversy in Newfane, NY

Blackie and Hornie, also known as Little Willow and Ishmael. 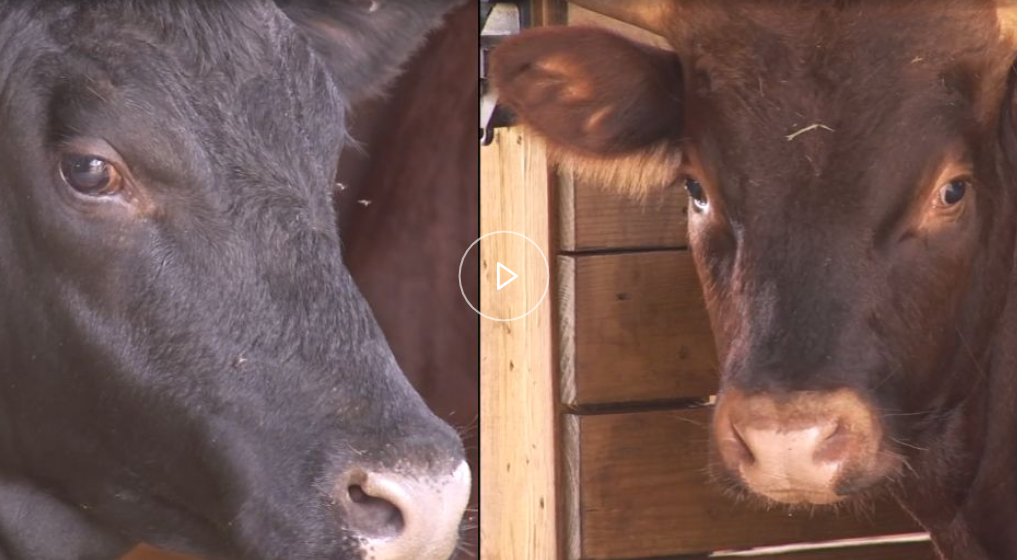 All of the following content is permitted for use in the press. Renee King-Sonnen is reachable directly for an interview at [email protected] or by calling Renee at 979-314-9925.

(Waelder, TX) – Renee King-Sonnen and her husband, Tommy Sonnen are co-founders of Rowdy Girl Sanctuary, and the Rancher Advocacy Program. King-Sonnen’s husband was a multi-generational cattle rancher until his wife Renee advocated for a more compassionate way  – and they did so in the heart of Texas. The sanctuary formed in 2014 when Renee King-Sonnen took a stand to save the lives of the animals, and to stop harming them. Four years ago Renee and Tommy Sonnen started the Rancher Advocacy Program to support ranchers and farmers transition from animal based agriculture into plant based agriculture when they’re ready to consider another way, a compassionate way for everyone – human and animals.

“I’ve been watching the heated situation happening between Asha’s and the cattle ranchers unfold for the past 10-12 days. I was alerted about the tumultuous event when someone told me about what was going on, and asked me to give my opinion in a news story, but I didn’t want to get in the middle of it at the time because it was so heated. I was totally immersed in the saga and it reminded me of my own crossroads when I confronted the authority of my multi-generational cattle rancher husband. When I did,  I had an old fashioned “Rowdy Girl” Texas showdown with him in the middle of our “then” cattle ranch. He was getting ready to send all the cows to the sale barn and I was blocking him. Our story caught wind of a publicist who told our story about a Texas cattle ranch that turned vegan in the Houston Chronicle in 2016. That article immediately got picked up by major media news outlets all over the country. It was then that CBS Evening News’, “On the Road with Steve Hartman”, got wind of the story at CBS in New York, a story which was very inspirational to them, and within two days CBS’s Steve Hartman and crew were at our sanctuary/former cattle ranch in Angleton, TX.

Our story of cattle ranchers turned vegan went viral in the best of ways. Our heart and soul had shifted to one of complete love, compassion and protection for the animals as we wanted them to live out their full natural lives, free from harm and with love and compassion.  We were saving the very animals we used to buy, sell, and send to auction to be sold for slaughter—and much of the farming community in America responded in a way that took us all by surprise. We were embraced by them. King-Sonnen continued to state, “As a result of that landmark event, cattle ranchers, their wives and other family members started to contact me privately to talk to me about the feelings they have for the cows they planned to send to slaughter. I was overwhelmed with communication from the ranching community and I found myself privately having very intimate conversations with folks that normally would never talk about “the feelings” they have for animals they send to slaughter. Our awakening on a Texas cattle ranch opened not only a door but windows in all directions that needed to be opened—windows that had been barred shut by the archaic traditions and culture of normalized violence.

Animals suffer every second of the day and no one ever sees their tears, or the frantic look of fear in their eyes, and no one ever hears their agonizing, guttural moans of despair and brokenness when their lives are brutally taken from them; the last thing they see before having a bolt to the head, their throat slit and their body slaughtered, is a slaughterhouse worker’s eyes. Their lives matter to them. They all want mercy. It is within our power to choose life…to do the right thing. That right thing is genuine compassion.

These two cows, known by some as Blackie and Hornie and by others as Little Willow and Ishmael, should experience all that freedom means. They deserve to live in green pastures and with their families all the days of their natural lives, just like humans. They have been seen by the public and we have a moral obligation to do the right thing. Give these cows their freedom–if they could speak they would be begging for their lives. How do I know? Because I’ve been on both sides.  Farmed animals are gentle in nature and the fact that they’ve been treated savagely in the system of animal agriculture is a crime against the benevolent nature of humanity. I pray the suffering of all sentient beings ends in my lifetime.

What’s happened at Asha’s is another one of those crossroads in the history of our civilization. Who’s right? The cattle rancher that perceives animals as “property”, or the sanctuary founder who sees the cows as victims in a system much like that in the old days of the Civil War. We are at a time in history where both sides need to be aired out, the cattle ranchers that fear they are losing their identity, and animal rights abolitionists that have become ethical vegans to give animals with no voice, their own. We don’t have to have an all out war to come to the table of reason, do we? My husband, Tommy Sonnen always says: “Those that ignore history are doomed to repeat it.” When I was talking to him about what was going on in Newfane, New York he immediately said that it reminded him of the historical Dred Scott case. I asked him to explain and when he did I vaguely remembered the landmark “Dred Scott Decision ” that gave freedom to people that had before been considered as property. People who were considered “property” back in the day fought hard to obtain freedom from “ownership” because they were never born to be bought and sold and we all know that!

So it is up to us to either BE or NOT TO BE their voice. As a former cattle rancher, turned vegan in the heart of cattle country I’ve made my decision. That decision led to us starting the Rancher Advocacy Program which just celebrated its 4 year anniversary. RAP’s mission is to be a voice for farmers and ranchers that want to transition out of animal agriculture and into plant based models of production, not alienate them because they are stuck in an archaic system, feeling as if they are without much choice but to raise animals for “food”.  In fact, in my opinion, cattle ranchers and other animal farmers themselves have been led to believe that if they don’t produce food using animals for profit, they fail. That is not the case. The Rancher Advocacy Program is bringing farmers and ranchers to the marketplace of plant based agriculture. For instance, the RAP team is transitioning a former chicken farm in Arkansas to a state of the art mushroom farm.

This is a perfect opportunity for the ranching community to “hear” the voice of the humans that see animals as sentient and deserving of rights to their own life. Cows and all animals value their own lives and the lives of their families. Most vegans were not born vegan, we awakened. My awakening was on a Texas Cattle Ranch married to a multi-generational cattle rancher. Every rancher I know is the salt of the earth—they are good people—we do business with them every day. My form of veganism is different from the typical vegan because I am also a rancher advocate. I’m not here to condemn ranchers, I’m here to bridge the gap. The chasm is wide but our common ground is our genuine unadulterated humanity and ability to reason. When we know better, we should do better–shouldn’t we?

We all deserve to be heard. The cattle ranchers are coming from the perspective that their property was stolen and the vegans are wanting to save the cows from going to slaughter because they found freedom in a sanctuary. I believe that in this situation the cattle ranchers should give these two cows a reprieve, so that they can live out their full lives with freedom and love, never experiencing harm and maybe this case can be a starting place for true humanity to emerge—humanity that finds a deeper context to what it means to give justice and mercy to those with no voice. What I’ve learned as a former cattle rancher who is now vegan is that I always thought I was a compassionate person until I became an ethical vegan.

There is no way to do the wrong thing the right way–the biggest lie we tell ourselves is that there is a humane way to slaughter animals. Everytime we send an animal we have cared for to the sale barn, we betray them and ourselves–we lose our humanity a little more with each living life we relinquish to the kill floor of animal ag.

There are levels and depths of compassion that I didn’t know I had a capacity for until I went vegan and started seeing the lives of animals through their eyes. No one is born to suffer and if we are taught that befriending an animal and then killing it is right, then we are wrong–it isn’t! – And if we can prevent suffering, why wouldn’t we?

The following is a quote from Lisa Pellegrene – Author of “Be Epic, Choose Love, and “A Glimpse Into the Sunshine,” also permitted for use in the press.

“To be a voice for the cows, whether known as Blackie and Hornie, or Little Willow and Ishmael, they both want  to continue to live out their natural lives with love and compassion, joy and freedom; and being  who they are – kind, compassionate, intelligent, and adorable beings. My hope is that humans can work out their differences, and come to a place of love, understanding and compassion for all involved. I hope and pray that these two beautiful cows can live out their full natural lives with love, joy, compassion and empathy; and to always be free from harm, and for love and compassion for all humans and animals too,” states Lisa Pellegrene.